One day we got a call from a Farmer that needed help with a litter of pups. At the time, they were only four weeks old, so we said we would come out and see how they were doing. 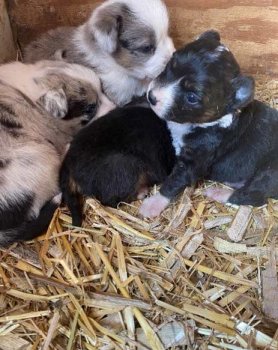 When I got to the farm, the pups were in a small barn. I played with the mom a little so she would be okay with me looking at her puppies. As I checked out the pups and gave them some wormer, I noticed that one of them had some swelling around the penis. It was something I had not experienced before. When you touched the swelling, some urine would come out. I took some pictures and sent them to one of the technicians at the clinic to see if they could give me an idea of what was going on.

Pretty quickly, they responded that it looked like canine hypospadias, a congenital disability that affects the genital area. A common sign of urinary incontinence in dogs is when your dog is leaking urine. Other symptoms may include pooling or spotting urine underneath your dog or swelling, irritation, or redness at the genitals area. Early detection of canine hypospadias can help prevent more serious complications. It can be corrected with surgery.

The thing is that this pup was too young and small for surgery. I talked to the farmer, described what needs to be done, and offered to take the puppy to make sure everything got done, and he would not need to worry about it. I left the food for the rest of the litter and took the puppy with me.

When we got back, we weighed him in to make sure he got the right amount of nutrition and started deworming. He was just 2.3 pounds and barely had any teeth. We started him on milk replacer and a nutrient paste. Luckily, he liked it! We also had to express the urine and make sure his skin stayed clean not to get urine scald. He did not like that too much. I took him to the Vet to assess his condition and get a better idea of what we needed to do to get him ready for surgery. She wanted him to get up to about 5 pounds but said that 2 pounds would be good if some of his vital signs were strong enough. So, we added a supplement to help build up the iron in his blood and continued with the rest.

A week later, he was 2.6 pounds and running around like a typical puppy. His skin was in good shape, and we took him into the clinic to see if he was ready for surgery. Almost everything was good. The Vet was still concerned that his blood count was too low, affecting how he handled the anesthesia. We decided to hold off on the surgery and let him grow some more. There was some concern that expressing the urine may cause some bruising, not to mention that he did not like it. He was too small for a standard catheter, so we decided to try one that was used to administer fluids and meds during surgery. This would allow the urine to drip out as he urinates, eliminating the need to express the urine. We still need to clean him regularly to prevent urine scald and make sure he did not pull the catheter out. He had to wear a cone the first couple of days. He managed to pull the catheter out the second day, and the Vet placed it again. After that, he did well with it. He did not need the cone, and none of this affected his appetite.

Discover all natural and pristine oil products at Young Living Essential Oils Website. Plus, enroll with me today by purchasing a Young Living Premium Starter Kit and sign up for an (optional) monthly package deal.

Visit our puppies listing page to discover all of our available puppies for adoption.